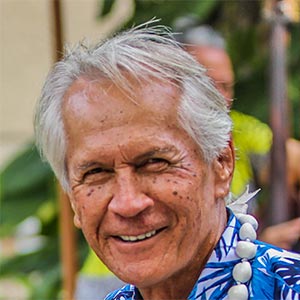 Kimo Kahoano is a celebrity emcee, entertainer, and radio personality. He is a spokesperson for many products, and an actor and singer.

Kahoano is a graduate of Kamehameha Schools and is a man of many talents. He started his career as a fire knife dancer/singer in the popular Al Harrington show. His training in other avenues including dancing, in which he was featured in some of the hottest live nighttime dinner shows in Waikiki. He capitalized on his very versatile voice that audiences easily warmed to and added acting to his resume including featured roles in Hawaii Five O, One West Waikiki with Cheryl Ladd, Hawaii (the NBC drama,) and numerous guest appearances in other TV shows and movies. His list of credits also include: Magnum P.I.; Barnaby Jones; The Jeffersons; the IMAX film Behold Hawaii and the movie, Blue Crush.

Kimo is also the perennial co-host of the Merrie Monarch hula festival and the television program Hawaii Stars with (with Carole Kai.) His recording of "Aloha Friday No Work Till Monday" with Paul Natto is a Hawaii favorite which audiences always enjoy seeing and hearing him perform.